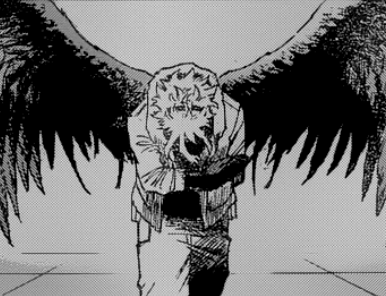 * It's only happened once so far, but it's a straight shot to more now I know the way. It was a joke about U.A. if you're interested to know. It's Endeavor-san's alma mater, but I never went there. I was put on the fast track for hero work when I was a kid, but I got trained... elsewhere. 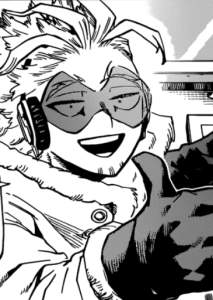 I guess it's an accomplishment or "historical first" as they say: I debuted at 18, started my own agency at 18, got into the top ten at 18, reached rank three by 22 and became Number Two at 22 a few months back. They call me "the man too fast for his own good," but that's excessive. I'm just doing my job! I take it easy and go at my own pace. If other heroes can't catch up to a guy like me, maybe they should try a little harder, huh?

Anyway, let's talk yakitori! When I've got time for it, hot pot is the way to go, but yakitori is pretty much the perfect food: simple yet infinitely complex. They've got a skewer for every part of the chicken, which is great because I like it all! White meat, dark meat, thigh, breast, neck, wings, tail, skin, cartilage, liver, gizzard, small intestine, and especially the heart! As for flavoring, you can't go wrong with classic tare. My favorite toppings are mentaiko and yuzukosho. That might be the Kyushu in me talking, but hey, what's good is good.

I know the basics of cooking (which is more than I can say for Endeavor-san), but most of the time I just eat out since it's quicker. Yoritomi Green was one of my favorite restaurants. It got totally destroyed in the nomu attack in Fukuoka along with the whole building, but don't worry! I'm not going to forget about that! Ever.

My favorite place is the sky, but these days if I'm not up there, I'd settle with feeling Endeavor-san's heat if you know what I mean. He's kind of like the sun anyway. Nothing like flying with the sun on your wings.

Incidentally, if you'd believe it I've never heard a single Icarus joke before? It's almost like as soon as I was born everyone collectively decided, "Hey, let's not make this guy's life more difficult by using tired cliche comparisons." People are so considerate.

That's enough about me for now - this site is dedicated to Endeavor-san! I've been a big fan since before I got my first light up action figure that goes whoosh. Still have that one actually. It's pretty beat up now, but... that just means it matches the real Endeavor-san again.