• Why is the URL "wingherohawks" if it's an Endeavor site?

Because Endeavor-san is our top hero but by approval ratings, he's only fourth. I'm just lending him my name to give him a boost since I'm second after Jeanist-san (may they find him soon). I mean, come on, look at these moogle results: 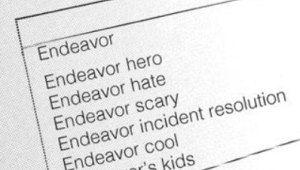 "Endeavor cool" is fifth. I can't sit back and just let that slide. Besides, I'm actually a fan of Endeavor-san so this site is all about me anyway. Just think of me as his producer.

• Do you think you packed enough fire imagery into this website?

Not really. A little more

• Why does the counter say "people" if it actually clocks page views?

Who cares? Did you read my answer to the first question?

• None of that fanmail was really sent in, was it? Admit it, you're just flying around selectively interviewing who you want! 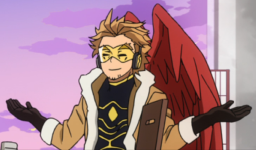 Some of them are emails or letters, you know? But alright, I'll clarify the process a little: check back on that page to see a brand new photo of me! Now, if you want fanmail, then sign the guestbook, it's:

• WAIT, if you're interviewing people in person, how'd you get statements from those League of Villains guys?!

...It's a sad reality of the job that professional heroes actually spend most of their time around villains: ordering them to cease, flying after in hot pursuit when they refuse, negotiating in hopes of a quiet surrender anyway, fighting to subdue when that doesn't work, remaining vigilant waiting for the police to arrive to conduct the actual arrest, giving evidence and statements to the authorities, attending trials when you're called to the stand to provide eye-witness testimony... Sometimes there's a bit of downtime between all that for a bit of idle chatter, quiz them on their opinions on pop culture, politics, Number One Hero: Endeavor, etc. They do write me too. Did you see what Ending put on my guestbook? Big Endeavor fan, that guy. 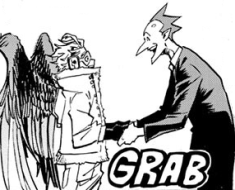 • There are ads on the site now! What happened?

Unfortunately, web hosting doesn't come cheap. Fortunately, there's actually only one ad! It's on the page about me. The rest are technically sponsorships. I happened to meet the President & CEO of that lifestyle support company Detnerat recently and we hit it off pretty well. Isn't it terrible what happened to him in Deika? And of course, Ms. Executive Director of Shoowaysha Publishing, may she find happiness in the next world. Mr. President introduced me to a few of his other friends, though. They all loved the site, so what can I say? If you trust your Number Two, then in so many words:

These sponsorships aren't bad. The leaders of all these organizations are dedicated individuals, to say the least. Breaking it down, preservation of this society asset involves a league of measures which should not be normally taken, but please. For Endeavor-san? They'll help us raise firepower awareness all over! 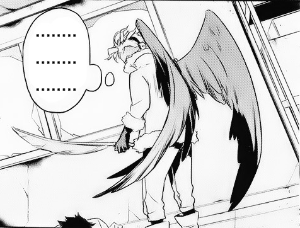 • Well, why is the one ad for a villain supply store?

.........Is that what's showing up? Hmmm. You know that ad is based on analytics of browsing habits, online activity, and search engine usage, right? It's definitely got nothing to do with me or what I've been involved with or web surfing about. It's worrying this is getting asked frequently, so I'll just tell you that if you're planning on loading up on black market equipment and engaging in illegal quirk use or villainous acts, I'm duty bound as a pro hero to put a stop to it as fast as I can. In the meantime, since I've got a lot going on right now, I'll alert the police and see if they can get to the bottom of this...

This again? No. Endeavor-san hasn't met him either. Just because a guy has wings...

Let's get to some actual questions about Endeavor-san, please!

• Can I submit a fanwork about Endeavor?

Absolutely! Shoot it to me at hawksofficial@hotmail.com. Include who to credit and keep in mind we're trying to win Endeavor-san a little more mass appeal here. If no one shares anything, I suppose it'll be up to me to upload whatever I can about his assets. You get a pretty good view from above.

He did once. With my help, with my speed, Endeavor-san flew. 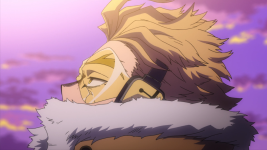 But otherwise, sadly no. With his rocket boots, Endeavor-san can hover and jet around, though he claims he's only "not falling." Who knew he could be so modest? Besides that, there was whatever this was! Impressive, isn't it?

• What is Endeavor's favorite food?

Not sure yet. He never answers when I ask, but I saw him eyeing some mochi in a shop window once. I said we could pop in and grab some real quick to take with us on the rest of the patrol, but he got all fired up and called me incompetent. I got some anyway and stopped a couple villains before he could while snacking but he still refused to accept any. So maybe it's not mochi after all... I'll update his bio once I figure it out.

The other day we were strolling on duty together since I was in the neighborhood. I turned around for a second to stop a construction worker from falling down an open manhole, and when I looked back, I found Endeavor-san reading over an advertisement for this café's new drink, kuzu mochi cider. All I said was, "Oh, so it is mochi after all? Let's check it out, Endeavor-san!" and he flashfire fisted the flyer out of existence. I had to apologize to the construction guy because Endeavor-san melted footprints into the sidewalk with his boots stomping away, but I still managed to rescue one of the burning fragments. It had the café's address on it, but they'd listed just the street and intersection. I looked it up and it's in Nara! No wonder Endeavor-san destroyed the flyer on sight! That's a couple prefectures over from his agency. I can't believe he knew that just by memory, but he's Number One for a reason.

Now, I'm not into nurturing the next generation of heroes or anything, but a little unsolicited advice from your Number Two: it pays to familiarize yourself with geography. Next time you have a little downtime, consider cracking open moogle earth. Master the lay of the land and you can get a wing up on villains while simultaneously impressing your date on romantic business trips with your knowledge of local tourist attractions.

As for Endeavor-san's favorite food: I feel like I'm getting closer to the answer. Any day now, I'm sure my intel will come through.

• How hot is Endeavor?

Great question! Now my science isn't exact, but at the base level, he swoops right past Extremely to perch somewhere toasty between Blazing and Scorching. I often think to myself, 'Surely Endeavor-san can't get any hotter, right?' Yet every time I see him, he proves me wrong. In terms of hard data, his actual maximum output is a trade secret, but I'd wager he could produce a flame of at least 1,500° Celsius. 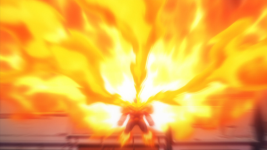 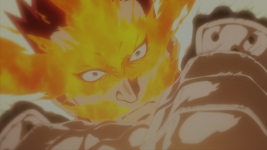 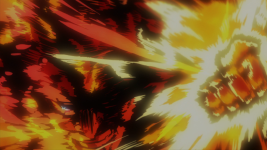 Hey now! What do you think a guarantee from me is good for? I may be the one responding to them initially, but he'll see them, don't worry. Since we'll be spending a little quality time together soon, I'll print them out and give them to him like a digest. I mean, All Might will also be there, but I'm sure no one's written anything they wouldn't mind being read by the Symbol of Peace, you know? 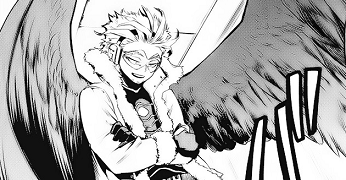 Have you seen him? Just watched him, like he said? I've been watching for a long time... For years he's tried to surpass All Might. Everyone knows that. But he was the only one.

The only one. He never gave up.

Haven't you ever had an impossible dream?

We're best friends and he loves me. 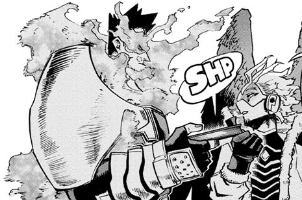 Click the button to have all your burning questions answered by me!