First off, let's meet our man! 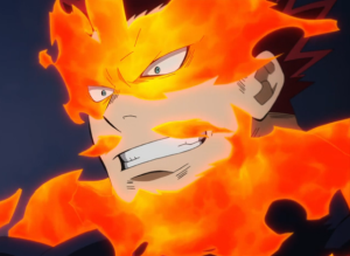 Don't discount that last one. You know he could just burn garbage to ashes, but Endeavor-san obeys municipal codes regarding proper waste disposal and cares about our environment.

Endeavor-san has a well-deserved reputation for being tough on crime and criminals. He leads a flock of more than thirty sidekicks resolving over a hundred cases a day. Week-by-week, year-by-year, do the math! That's how it adds up to the most resolutions of any hero, ever! But that's not just takedowns of troublemakers. The Endeavor Hero Agency does rescues, evacuations, escort missions, and special requests too! But it's only villains who need to beware. For everyone else, Endeavor-san has a special message he'd like to share.

Personally, I'm not afraid to say I'm ready to come right now, immediately. If you're having a little trouble, Endeavor-san's signature move Flashfire Fist: Hell Spider might take care of it. He threatens me with that one sometimes, but I've never needed it myself. 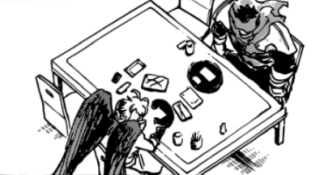 In his off time, Endeavor-san enjoys getting lunch with colleagues and asking for advice from trusted friends. Sometimes he even does both at the same time.

Endeavor-san is excellent at multitasking, which he should remember the next time his trusted friend and colleague would like to look at something on patrol. They can take half a second to investigate what that shine was, especially if it's a glittery konbini window display with the weekly specials on karaage. It's not even like they really have to slow down as trusted friend and colleague has perfected conducting speedy transactions on the go via feather.

Endeavor-san is also a father. He had a new house built for his family recently. I told him he should put in a lot of windows for optimum sky viewing. I haven't seen it, but I'm sure he followed my advice. I asked him if there was anything special he'd like to share about his kids, though, and his eyes started to sparkle. I didn't manage to get a photo since I got distracted, but luckily when I chatted with Fuyumi-san the other day, she passed along this: 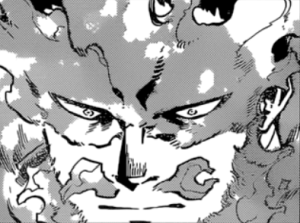 She must've gotten it when he wasn't paying attention. Not well known about Endeavor-san, but he absolutely can't smile on command. He might have developed it as a defensive measure against someone else known for smiling a lot, or it could just be his face. All I know is that he starts blustering when you point it out. Last time I did, he burned his shirt because he got so hot under the collar.

Even if he can't always smile, Endeavor-san knows his way around a compliment. Just the other day he told me my eyes look like fried eggs. I really wasn't expecting him to pull out such a flirty line totally unprompted like that. Usually it's me they're telling to slow it down... Kind of romantic when you think about it.

The mod of this site has made contact with an exclusive informant. Endeavor-san's own intern and youngest son Shouto-kun has notified me the handsomeness of Endeavor-san's smile actually is a choice! Photographic evidence has yet to be obtained, but you can count on me. I'll be stretching my resources to the extent of my current ability to capture the most elusive Endeavor photo yet — and share it with all his fans! Hmm, though this still doesn't explain why he gets all red in the face when I ask him to give me a grin outright...